We are Hawaii’s community blood center 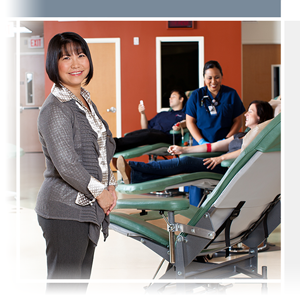 Blood Bank of Hawaii is a non-profit organization that provides lifesaving blood products to 18 civilian hospitals statewide. Typical uses for the blood include surgical procedures, treatment of accident victims, ulcers, anemia, delivery for mother
and baby, and cancer.

Blood is collected at the Young Street Donor Center. Blood Bank of Hawaii is also on the move daily, setting up mobile collection sites within companies, organizations and community centers. Two bloodmobiles also travel to numerous communities on
Oahu.

Blood Bank of Hawaii’s mission is to provide a safe and adequate supply of blood, blood products and related transfusion services to the patients of our state.

Saving lives for more than 70 years

Blood Bank of Hawaii opened its doors in February 1941 on the grounds of what is now The Queen’s Medical Center. Known then as Honolulu Blood-Plasma Bank, the blood bank served as a wartime agency under the Office of Civilian Defense, returning to
its non-profit civilian status in 1943. Honolulu Blood-Plasma Bank officially changed its name to Blood Bank of Hawaii in 1946.

In the early years, blood was collected in glass bottles, hemoglobin checks were done via the earlobe, and a single van went around the island to collect blood. Services were expanded to included neighbor island blood drives and Hawaii’s unique
ethnic population became nationally recognized as a source for many types of rare blood.

Today, state-of-the-art blood bags are used for collections, adequate iron levels are verified through technology, and blood is collected at two fixed sites, along with two bloodmobiles that travel to Oahu’s neighborhoods providing convenience for
donors. Blood Bank of Hawaii adheres to the highest standards of safety and quality and continues its long commitment to providing a safe and adequate blood supply for Hawaii’s patients.

Sign in to schedule appointments, view your donation history, and more!

Please support Blood Bank of Hawaii by donating to the HawaiianMiles Charities Program!