Everybody has it. Everybody needs it. 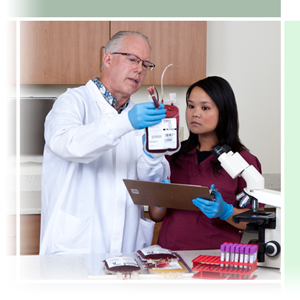 Everyday, someone needs blood. Since blood cannot be manufactured outside the body, donors play a vital role in the health of our region. About 200 blood donors are needed every day to help meet the needs of Hawaii’s patients.

There are many reasons patients need blood. The major reasons are cancer, heart and blood vessel disease, disease of the gastrointestinal tract, and emergencies including car accidents and burns. The amount of blood each patient needs depends on the situation.

Although all blood is made of the same basic elements, not all blood is alike. In fact, there are four common human blood groups determined by the presence or absence of two chemical markers, or antigens “A” and “B” on the surface of red blood cells. This classification of human blood types is known as the ABO Blood Group System.

The Discovery of the ABO Blood Group System

In 1900, Austrian scientist Karl Landsteiner discovered that the sera from some people reacted with the red blood cells of other people. He originally identified three blood groups: A, B and C (later named O). Consequently, type AB was found and all four blood type were identified, forming the ABO Blood Group system.

The blood group to which a person belongs is genetically inherited from one’s parents. Since mixing blood from two individuals may cause the destruction of red blood cells and can have fatal consequences, it is very important that blood types are matched prior to a blood transfusion.

Advances in Safety and Use

During World War I, when human blood was needed for transfusions for wounded soldiers, studies of how to preserve and transport blood began. Not until World War II, however, did the development of effective preservative solutions make blood transfusions widely and safely available. There have been many advances since then, including the discovery of additional types of blood such as the Rh positive and Rh negative classifications.

Today, nearly every blood donation is fully utilized. Elements of blood can be separated by centrifuge. Plasma can be preserved by freezing. Each blood element can be used to treat different diseases.

Blood is tested for diseases it may carry, and any blood testing positive for a disease is destroyed.

Sign in to schedule appointments, view your donation history, and more!

Please support Blood Bank of Hawaii by donating to the HawaiianMiles Charities Program!